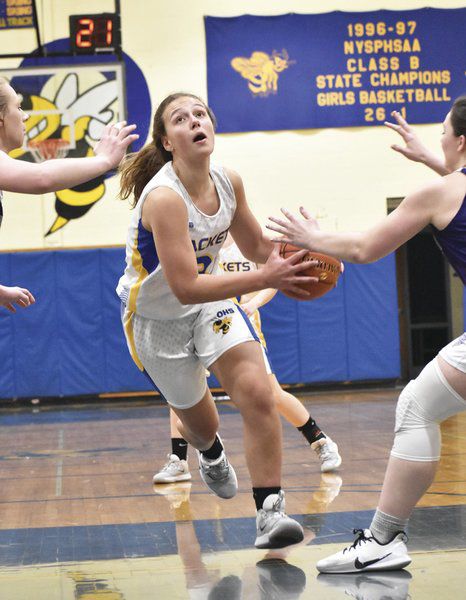 JARED BOMBA | The Daily Star Oneonta’s Anika Buzzy charges through a pair of Norwich defenders on her way to two of her 11 second-quarter points during Wednesday’s Section IV Class B girls basketball semifinal at Drago Gymnasium. 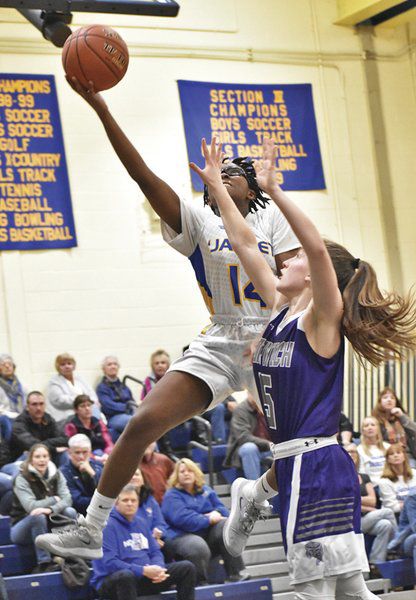 JARED BOMBA | The Daily Star Oneonta’s Anika Buzzy charges through a pair of Norwich defenders on her way to two of her 11 second-quarter points during Wednesday’s Section IV Class B girls basketball semifinal at Drago Gymnasium.

ONEONTA — They say it’s hard to beat the same team three times in the same season. It’s even harder when the team is known for relentless full-court pressure.

Oneonta found out the hard way, as injuries and 30 turnovers derailed the top-seeded Yellowjackets in a 55-50 loss to fourth-seeded Norwich on Wednesday, March 4, in a Section IV Class B girls basketball semifinal at Drago Gymnasium.

“I think that saying should really be ‘it’s never easy to beat a good team three times.’ Norwich is a good team,” Oneonta coach Matt Miller said. “We knew coming in this was going to be a situation where if we didn’t take care of the ball, tonight was going to be really hard.”

The loss ended the OHS season at 17-4, with the Yellowjackets collecting the Southern Tier Athletic Conference East Division championship and earning the section’s top seed.

“We had a really successful year, so through it all, we’ll look back on the good wins we had and the good moments,” senior Laine Johnson said. “It’s always intense playing against them. The Norwich girls played really hard.”

The Yellowjackets looked to be wresting control from the Purple Tornado a minute into the fourth after Hannah Johnson hit one of her three 3-pointers for a 40-33 OHS lead.

But Norwich answered with triples from Margaret Dougher on back-to-back possessions, the second of which was followed by a turnover at midcourt by junior Anika Buzzy. Buzzy, who had been key to the Yellowjackets’ efforts in all phases of the game, went down with a lower-body injury. Already missing sophomore guard Ang McGraw since the first half, the OHS bench continued to get shorter.

“In the first quarter when Ang went down and we knew she wouldn’t be back, someone had to step up because she has done some of everything for us,” Miller said. “Anika coming out for that little stretch showed how important she really is too....take her out of the game, and you notice it.”

“The kids came together collectively, and I think we did a good job of stepping up as a group,” Miller continued. “That’s the signature of a good team. When the chips are down, someone finds a way. We did a really good job of that all year and tonight was another example.”

A basket from Ava Eichler on a dish from Laine Johnson returned OHS to a one-point lead after a 3-pointer from Norwich’s Sydney Coggins, but the Purple Tornado continued to connect from deep when it was needed most.

Buzzy returned with just more than two minutes to play, but another triple from MacKenzie Hess and an old-fashioned three-point play from her on the next possession saw Norwich take a 50-46 lead with less than two minutes remaining that it did not surrender.

Laine Johnson hit two foul shots later, but a 3-pointer from Eichler rimmed out with less than a minute to play and the Norwich lead at four. The Yellowjackets had a few chances to cut the deficit late, but turnovers continued to bedevil the hosts as time ran out without a chance to tie it.

“I knew it was going to be a battle. They have an amazing press,” Buzzy said. “We knew coming in we couldn’t turn the ball over, but it just didn’t go our way tonight.”

Eichler had 13 points and a 6-for-7 effort from the foul line, also recording six rebounds, three blocks and three steals. Laine Johnson also had six rebounds with three points and Yuliah Johnson scored five points along with a team-high five assists.

Abby Flynn scored 14 of her game-high 18 points in the first half for Norwich before fouling out in the fourth. Hess scored 15, Emily Evans had nine and Dougher totaled eight for the Purple Tornado.

Norwich finished with 20 turnovers while forcing 30 by Oneonta.

“Our goal was to keep it under 20 turnovers against their press. If I looked at these statistics before the game, I probably would have said we were going to lose,” Miller said. “I’ve got to give them credit because they are relentless. They made it really difficult for us.

“But it’s a credit to our kids as well. We have tough kids that defend extremely well,” Miller said of his team’s ability to stay in the game.

“This has been the best team I’ve been a part of,” Buzzy said. “We’ve always found a way to win, and we play so well together. We really meshed well together.”

Miller also said that the departure of the three OHS seniors, Laine Johnson, Danielle Basdekis and Maria Farrell, will leave a larger hole than statistics may suggest.

“This year was an exceptional year, probably our best in the last six years,” Miller said. “Those seniors don’t necessarily show up in the in the stat sheet, but their leadership and ability to keep this team focused was there. It’s one of the better teams I’ve ever coached in terms of being galvanized and together. We are really going to miss them.”

“The seniors, I don’t think we have any regrets,” Johnson said. “We had a really successful season. We got really close.”

TAMARAC, Fla. - Seth E. Yerdon, 83, of Tamarac, Florida, formerly of Cherry Valley, passed away peacefully on Monday, Aug. 10, 2020. Seth was born on Feb. 20, 1937, in Little Falls, a son of the late DeForest and Mae Yerdon. Seth is survived by his two daughters, Tracy Moylan and Cheryl Myin…

DAVENPORT - Born in Philadelphia and a longtime resident of Oneonta and Davenport Center, Barton Bonney passed peacefully at home on Saturday, July 25, 2020. Barton relocated to Oneonta with his family to work for WDOS as a radio engineer. He then owned the Radio Shack on Chestnut Street. Ba…