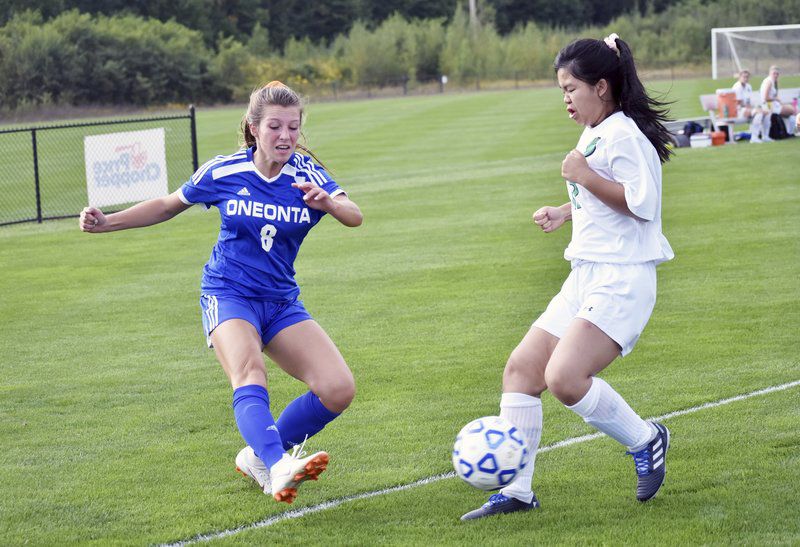 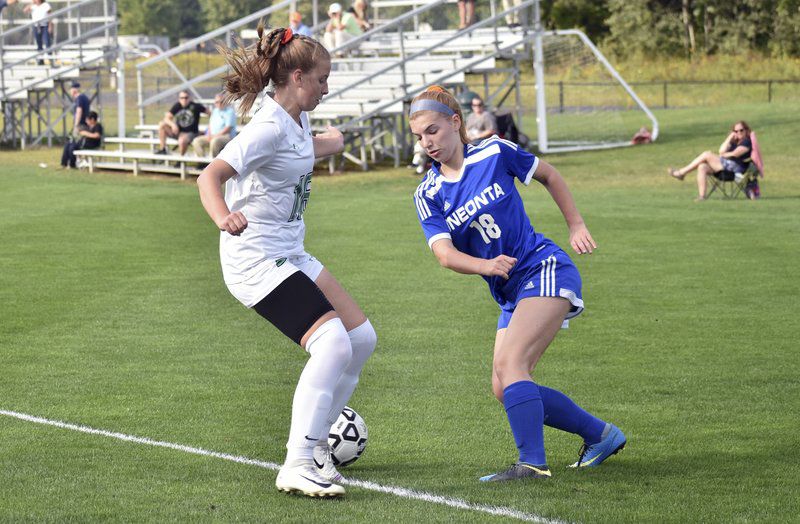 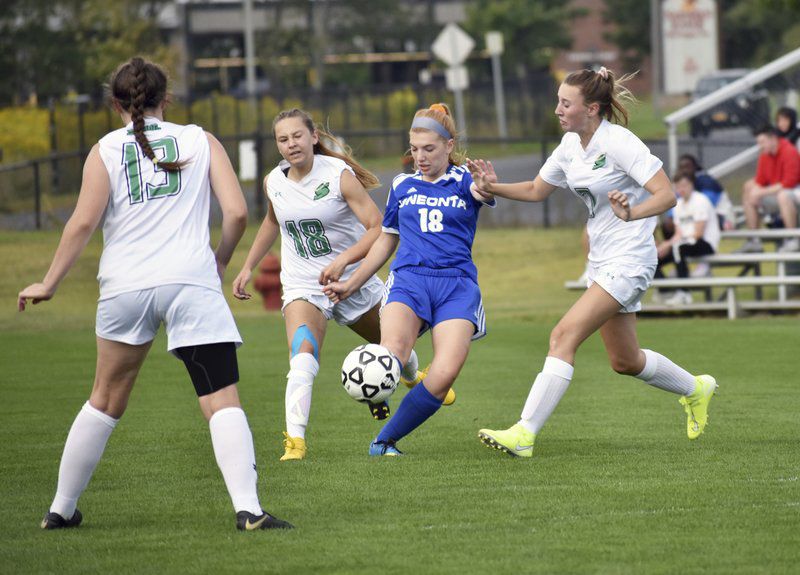 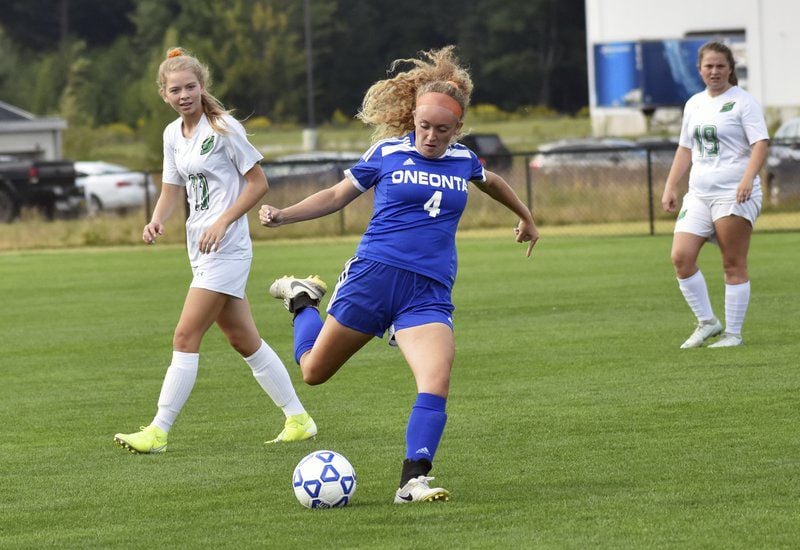 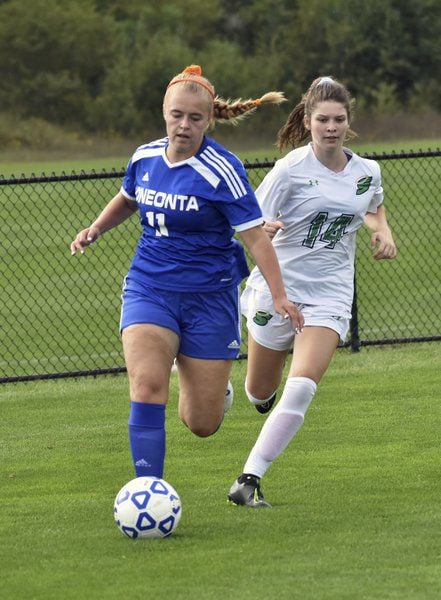 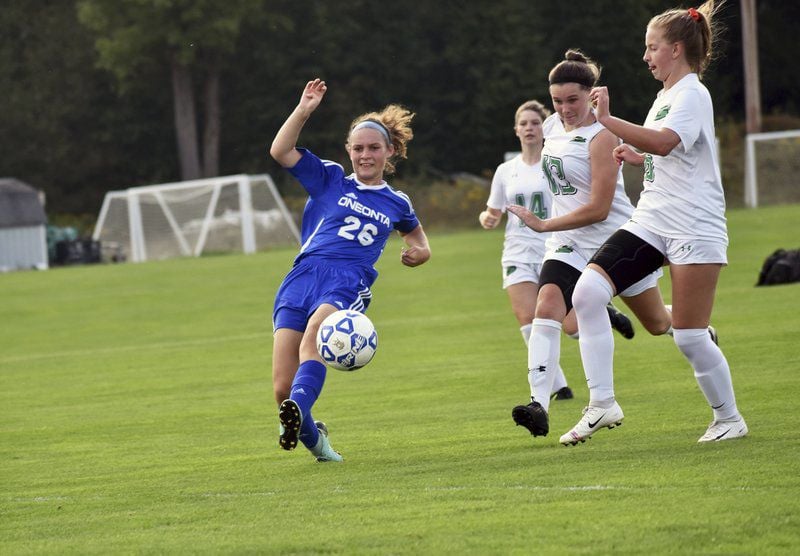 ONEONTA — After his team knocked off defending state champion Chenango Forks on Monday, Oneonta coach Jerry Mackey stressed that an emotional letdown, leading to a draw or loss to lesser opposition, would negate the achievement.

His team must have gotten the message, scoring two goals in the first eight minutes and five in the first half of a 9-0 demolition of Seton Catholic on Tuesday at Wright National Soccer Campus.

“We try to come to every game prepared,” junior Hannah Johnson said. “We know not every game is going to be Chenango Forks. Even against a team like Seton Catholic, we have to bring it because at this point we can’t have any letdowns. We’re on top right now.”

Johnson, who scored all four goals for the Yellowjackets in Monday’s 4-3 win, did her part early by scoring the game’s first goal with 33:18 left in the half. She controlled a short Seton Catholic goal kick, eventually getting off a shot from distance on the left side. The left-footed strike grazed the fingers of Seton goalkeeper Grace Merke before hitting the far post and glancing in.

Oneonta senior Morgan Jipson doubled the lead 21 seconds later, bursting through the middle to meet a pass from Martine Hitchcock and finish high into the corner past an onrushing Merke.

“We have good internal leadership on this team,” Mackey. “Seven of these girls have been with me for four years, so they get the ebbs and flows of what we’re trying to accomplish. They hold themselves to a high standard.”

The Yellowjackets continued to suffocate the Saints, winning goal kicks and punts while stifling any forward thrust. The reward was Johnson’s second of the day as Anika Buzzy played her through the right side of the Seton defense, allowing the junior to slot the ball into the far corner with her left foot.

Buzzy got on the scoresheet three minutes later as the Yellowjackets piled on the pressure. Her dipping effort from outside the box arced into the back post for a 4-0 OHS lead with more than half of the opening period remaining.

“Goal kicks are almost a chance to go for us,” Mackey said. “Goal kicks we feel are kind of coming right back to us, and we did a good job with that yesterday and we scored on goal kicks and a corner today.”

Autumn Nealis finished the first-half scoring for Oneonta with 11 minutes left on the clock. Dani Basdekis, Meredith Smithling, Maddy Hansen and Olivia O’Donnell, a group largely made up of players that typically play defense, each scored in the second half as the Yellowjackets pulled away.

“Our defense has played great to get the balls pushed up for me and Morgan (Jipson) to run on,” Johnson said. “It’s such a team effort, we wouldn’t be scoring without them putting us into spots.”

Oneonta finished with a 28-9 advantage in shots and a 10-2 lead in corners. Merke made four saves for Seton and Gianna Ricci made eight, while O’Donnell, Basdekis and Hitchcock each stopped one shot for OHS.

The win is a second straight for the Yellowjackets since a 2-2 run that included an 8-2 loss to Forks and a 4-0 defeat by Section III Class AA powerhouse Baldwinsville.

“We just want to be confident as a group,” Jipson said. “We always try to up each other, not yelling at each other. That keeps us going.”

Mackey said that the tough competition, coupled with the win over Forks, has his team doubling down on its postseason goals.

“It sharpens the focus for us,” he said. “If Forks had run us over again, we can say the right things, but do we really believe that in a tight game, do we have a chance? Now we know we always have a chance if we play well.”